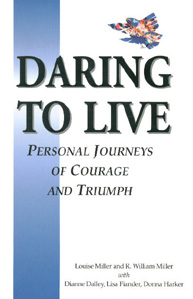 Amazing stories published by Disabled group. Book meant to show rest of us what they can do

The new book Daring to Live tells the stories of 12 disabled Albertans, but its intended audience isn’t people with disabilities.

“We already know what it’s like because we live it every day,” says Louise Miller, the driving force behind the volunteer group that produced the book, “It’s for all of us — to show what we’re capable of.

“It describes how the human spirit can overcome just about everything, no matter how devastating.”

On Wednesday evening, Miller, the authors and several of the “storytellers” whose experiences are recounted in the book crowded into the basement of Audrey’s Books for the official launch.

“I defy any of you to read about these people and not be moved,” Dianne Dalley, who wrote four of the chapters, told an audience of about 50. The other authors are Bill Miller, Lisa Fiander and Donna Harker.

The storytellers include Jeff Pruden, 34, who defied the doctors’ diagnosis of quadriplegia after a car accident four years ago to walk, live unassisted and even drag race every weekend.

And Brian Laird, a professional volunteer co-coordinator for the Alberta Committee of Citizens with Disabilities, who lost both arms and one leg in an electrical accident in 1976, when he was 26.

And Debbie Lenglet, who became a paraplegic in a grain-auger accident at 16, and went on to win Olympic gold and silver medals for wheelchair racing.

“We didn’t really want superhero’s,” Miller says. “These are just everybody’s next-door neighbors. They don’t think of themselves as special in any way.”

Miller’s story is in the book, too.

She has used a wheelchair since 1984, when surgery to repair the damage caused to her heart by a rare virus left her with paraplegia

Since then, she’s won recognition for her volunteer work on behalf of people with disabilities, including the ITV Woman of Vision,  the YWCA Woman of Distinction award, the Rotary Club Integrity  Award and in 2000 she became a member of The Order of Canada.

But Miller prefers to concentrate on the triumphs of others, especially those whose stories fill her book.

“Each person just absolutely and utterly blew me away.”