2005 SCITCS initiated a meeting of interested individuals to address the serious matter of Pressure Wounds. The outcome resulted in a literature review a first step in the prevention of the development of pressure wounds. (See RESEARCH for additional information)

SCITCS presented a proposal (See ABOUT US to download) in March to the Hon. Gary Mar MLA to consider the establishment of an accessible Provincial Park fixed roof facility in the Northern part of the Province.

We identified a need for a totally accessible rental van that a person with SCI could drive. We spent a year exploring this with lawyers, personnel from Shoppers and Driving Force (a rental company) we commend Jeff Polovick and his management team of Driving Force who have included two fully accessible vans for rent, anticipated arrival 2006. 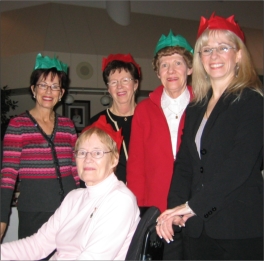 SCITCS has held monthly pizza parties for the 15 patients on the neurological unit and their guests for the past 23 years. 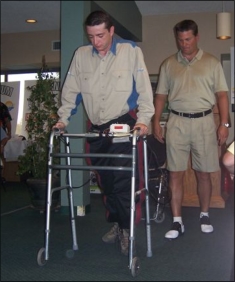 The Never Say..”Never” golf tournament was by far the most successful in the16-year history of the event. 150 golfers participated. Scott who has paraplegia demonstrated walking using Functional Electrical Stimulation (FES) SCITCS has donated over $500,000 to promote and support applied FES research. See video of Scott walking in SCITCS NEWS. See  www.craigsimpsoncharity.com for tournament updates.

Louise received the Alberta Centennial Medal that recognizes and honours the outstanding achievements of Albertans who have gone to great lengths to make their Province a better place to live, work and do business.

We are anticipating arrival of the RehaMove arm crank www.hasomed.de or click on Application of FES at the University of Glasgow, Scotland. This too will be a first in Canada. Achieved June 2006

The new equipment will be a part of applied FES research that will take place in the SCITCS FES Research Laboratory created and named June 2006 by the Faculty of Medicine and Dentistry at the University of Alberta.

We have taken possession of a Concept 2 rowing machine and are looking forward to acquiring the adaptive equipment necessary for FES rowing by April 2006. Achieved June 2006

We will expand the number of Ergys FES stationary bikes by three to a total of five and we will include an additional three Stim boxes. Achieved December 2006

An Ergys bike and a stimulator have been added to the FES equipment in the SCITCS FES Clinic to allow people with SCI and others to exercise by moving their paralyzed imbs and so maintain their health. It is anticipated that the additional bike and stimulator will promote expansion of the FES exercise program

Dr Brian Andrews professor at the University of Oxford, England and champion rower Robin Gibbons visited in September 2006. Dr Andrews and Robin are promoting the use of FES rowing to improve the health of people with a spinal cord injury. To date 6 participants with paraplegia competed against able-bodied rowers in the same event and were successful in earning 6 medals at the Indoor Rowing Championships held in England. Learn more about FES indoor competitive rowing in the UK. Dr. Andrews and Dr. Garry Wheeler, the original researchers, are to be commended as is Robin Gibbons captain, trainer and competitor who says” rowing has taken over my life”. See Robin’s story in the SCITCS Newsletter. pages 11-14  Achieved September 2006

SCITCS is awaiting the arrival of the RehaBike-tricycle from www.hasomed.de The RehaBike consists of a specially equipped recumbent tricycle and the RehaStim stimulator which uses FES.  At the push of a button cycling starts. The tricycle can be used to cycle outside the laboratory. Richard Stein Ph.D. of the Centre for Neuroscience, Faculty of Medicine and Dentistry will conduct research into the application of FES to cycle. Go to SCITCS Newsletter to view the tricycle in the FES Sports Day article Pages 10-11. Achieved March 2007 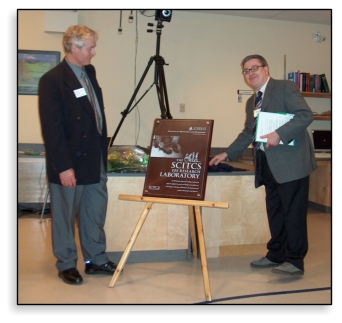